Canon just released the 5DS Camera that boasts a whopping 50.6 megapixels.  Renowned sea life photographer Franco Banfi from Switzerland gives it a real life underwater test. He offers many tips that I feel will be instrumental in underwater photography. The Canon technical article appeared in the August Edition of  Canon Professional Network News (CPN).

“He started off using a fisheye zoom, but soon moved to a wide-angle fixed lens, which gave him all the qualities of prime glass but with the flexibility of a zoom through the in-built cropping options.” 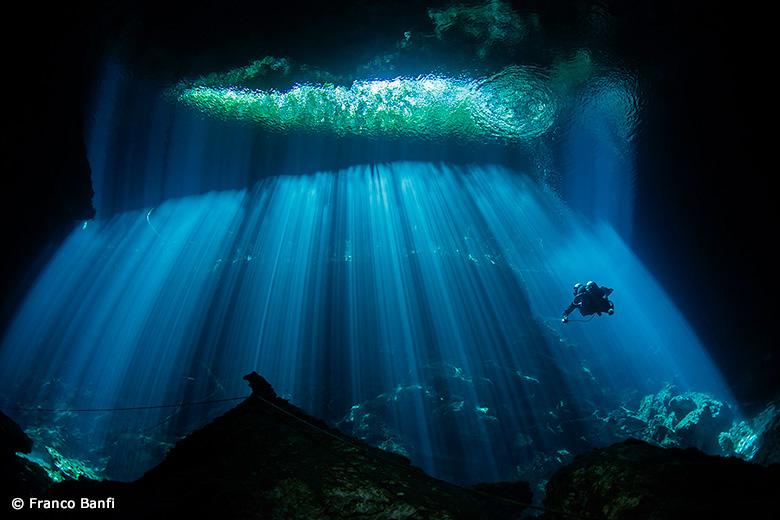 Franco Banfi: in at the deep end with the EOS 5DS

With its 50.6 Megapixel sensor, the EOS 5DS has made quite a splash. CPN writer Mark Alexander finds out how this high-resolution DSLR won over award-winning underwater photographer and Canon Explorer Franco Banfi…

Sooner or later we all have to take the plunge. It could be an artistic leap of faith or a commercial vault into the unknown, but as photographers it is inevitable we will be confronted by situations that demand us to adapt, adjust and think on our feet.

Franco Banfi takes this creative bungee jumping to a whole new level. The award-winning underwater wildlife photographer has been donning his wetsuit for more than 34 years plying his trade in the Pacific, Atlantic, Indian, Arctic and Antarctic oceans as well as the Mediterranean and Red Sea. While there he photographs all kinds of wild sea creatures such as leopard seals, tiger sharks and sperm whales with his eclectic approach to work mirroring the many subjects he shoots.

To capture his stunning images, Banfi opts for a world in which he is truly a fish out of water. “I have friends who are photographers, but they are scared to go under the water. They are scared for their safety. For me it is normal, but they say I am crazy.”

As if to prove his friends right, 56-year-old Banfi came face-to-face with a three-metre long American saltwater crocodile on his latest trip to the Yucatan Peninsula in Mexico. It was part of a 10-day trip that also included the equally hazardous pursuit of cavern diving. But the greatest unknown for the Swiss photographer during his perilous trip wasn’t the subject’s impressive dentures or the suffocating confines of the shoot locations, but rather the camera he brought with him…

For many photographers, the introduction of the 50.6-megapixel EOS 5DS has unlocked a creative door to a host of possibilities. Until his trip to Mexico earlier this year, Banfi didn’t share that view. “I must be honest,” he says quietly. “I was always against a camera with so many pixels, because I thought we didn’t need it. But after this trip, I have changed my mind.”

After throwing caution to the wind, it turns out Banfi is one of the first photographers to discover the in-built 1.3x and 1.6x cropped shooting modes of the new EOS 5DS are ideally suited to underwater photography where cameras and lenses are protected by domes and casings (Banfi opts for Seacam underwater housings). In fact, Banfi’s leap of faith has turned out to be something of a watershed moment for the photographer.

“We have a good dome for the fisheye lens because that’s the lens everyone uses, but with a zoom lens there is always a compromise,” he explains. “Now, with the EOS 5DS, you can have a zoom by changing the cropping factor. This was one of the reasons I was curious about this camera.”

You would think the ability to select between crops would come into its own when your subject has jaws that could crush bones, but Banfi says these options become even more valuable when the fear factor is on the other side of the camera. “Sometimes you can get close to an animal, but with this camera you can decide whether to go in close or not,” he says. “This decision isn’t always based on whether the animal is dangerous. Sometimes the animal can be scared of you, so it is better to select the 1.6x crop factor and keep your distance.”

With an in-camera preference to indicate the crop through the viewfinder, Banfi found he could see the diminished view in real time and determine how this would influence his composition. “You see the crop in the viewfinder,” he explains, “so you have total control of what you are shooting in the cropped settings, as well as what is captured in the full-frame image.”

Banfi explains he started off using a fisheye zoom, but soon moved to a wide-angle fixed lens, which gave him all the qualities of prime glass but with the flexibility of a zoom through the in-built cropping options. But the crop factors weren’t the only benefits he found when using the EOS 5DS. For a camera with such a huge potential to capture detail, perhaps one of the most surprising aspects of the new camera is that it retains the same dimensions as the popular EOS 5D Mark III.

“It’s fantastic; the EOS 5DS is exactly the same as the Mark III so I was able to put it into the underwater housing I already had,” says Banfi cheerfully. “For underwater photographers, this is brilliant news because if it wasn’t the same size, we would have to spend another €3,000 on a new housing. Now you can have both cameras. The choice is yours!”

With more pixels than you can shake a stick at and a surprisingly compact design, the EOS 5DS is a camera that pushes technological boundaries while retaining a reassuring look. The premise of continuity endures in the EOS 5DS both from its exterior design and also through the images it creates, as Banfi points out.

“When you go from one camera to another, it is the same. You don’t even feel the difference,” he says. “But in post-processing, I was very surprised to find that when you open the files in Camera Raw and adjust them by decreasing the highlights or opening up the shadows or whatever, you have so much control. I think this is because the camera records so much information. Before I used the EOS 5DS, I never considered this but after using it, I was very surprised. It is a very interesting feature.”

The massive 50.6 MP CMOS sensor powered by dual DIGIC 6 processors promotes low noise, faithful skin tones and accurate colour reproduction. It also records incredible amounts of detail while collating vast sums of data to produce files that offer a host of post-processing possibilities. Add to that a 61-point AF System with 41 cross-type focus points and the EOS Intelligent Tracking and Recognition (iTR) AF technology, and you have a camera that is not only powerful but incredibly accurate, too.

All this power certainly helped Banfi capture some remarkable images of smiling crocodiles in the crystal clear waters of a remote island lagoon, but how useful were all those pixels in the eerie depths favoured by cave divers? After all, direct sunlight is a rare commodity when you swim hundreds of metres into the ghostly world of an underwater cave. In fact, if ever you wanted to devise a test to appraise the low-light performance of the EOS 5DS, this would definitely be it.

“I am not a full cave diver,” Banfi admits. “I cavern dive which means I can always see the entrance or the exit of the cave when I swim. That’s because I am more interested in the pictures rather than the caves themselves. Anyway, there are lots of situations with interesting light in the entrance or around the exit of a cave because that’s where the sunlight is. You have to manage the light you have.”

He continues: “In these situations, there can be little light to work with so I have to up the ISO to 640 or 1,250 with the resulting images being very good. In fact, in my opinion, the low-light performance of the EOS 5DS is at least the same if not better than the EOS 5D Mark III.”

The DIGIC 5+ processor and 22.3-megapixel sensor of the EOS 5D Mark III has a formidable reputation for low-light shooting, so Banfi’s assertion of parity between the two cameras is noteworthy and bold. There is after all more than double the number of pixels in the EOS 5DS with each one offering the potential for more noise and image degradation. But it seems these have been controlled in the new sensor even when the image has been cropped in post-processing.

“You can see the quality of the camera,” he says. “I have a portrait image which was a crop from a landscape image, so probably more than 50% of the image has been cropped out. It was shot at ISO 1250 and the image is clear and the colours are accurate. I think there is no question of its quality.”

The image in question was taken in a sink-hole where the insipid light created an eerie setting weighed down by a heavy atmosphere framed by dark, impenetrable recesses. The resulting image retains all of the drama but is almost airy by comparison and shows none of the potential pitfalls one would think would blight a digital file taken in such a forbidding environment.

There is no doubt Banfi leaps off the proverbial high board every time he goes on a shoot be it with sharks, whales, crocodiles or in underwater caves. Each of his adventures is accompanied by degrees of risk and danger that many would find intolerable. But on this occasion, he overcame his own misgivings to unlock the potential of the EOS 5DS. Swayed by the cropping options, physical size and quality of the images it produces, Banfi offers his advice to those yet to take the plunge. “If you opt for the EOS 5DS,” he concludes, “you will spend a little more money, but you will have many more possibilities to explore.”