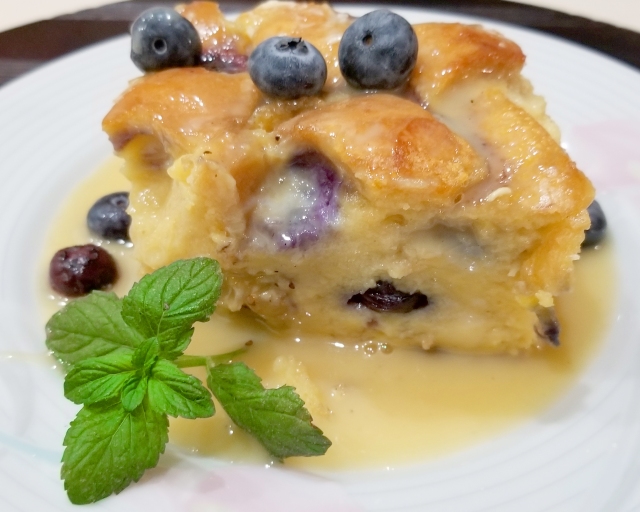 The holidays are just around the corner and I wanted to share one of the most popular  New Orleans bread pudding dessert recipes. Although, I have tweaked and elevated the original recipe slightly, as one would expect from a true New Orleanian. I think rehydrating the dried golden raisins with rum adds to the flavor even though must of the rum will evaporate in the cooking process. The blueberries add yet another flavor that works well with the white chocolate.

This recipe is a variation of the one served at the Palace Cafe in New Orleans.

How to Make It

Preheat the oven to 275°. Stand the bread slices on a baking sheet and bake for 15 minutes, or until dry but not browned. Transfer the bread to a 13-by-9-by-2-inch baking dish in an even layer. Increase the oven temperature to 350°.

In a large saucepan, heat the cream with the milk and sugar until hot but not steaming. Remove from the heat, add the white chocolate and stir until melted.

Cover the pudding with foil and bake for 1 hour. Remove the foil; bake for 20 minutes longer, or until golden and puffed. Let cool for at least 20 minutes. It will sink slightly as it cools

Bring the cream to a boil in a small saucepan. Remove from the heat, add the white chocolate and stir until completely smooth.

Cut the custard into squares or slices and spoon the white chocolate sauce on top until it pools slightly around the pudding slices.  Garnish and serve slightly warm,  Yummy!

If made ahead of time you can microwave the servings for about 20 seconds each. I feel this dessert is much better served warm.