The Sparkman Wharf opened this past weekend. The Wharf is part of the multi-billion dollar riverfront development in the formerly named Channelside area downtown Tampa Bay. Projected to be complete in early 2020, Sparkman Wharf will also include about 180,000 square feet of office lofts, 65,000 square feet of ground-floor retail. The mixed-use development is being created by Tampa Bay Lightning owner Jeff Vinik and Microsoft founder Bill Gates, through his company Cascade Investment.

Fueled by months of anticipated opening postings on social media, large crowds gathered and filled most of the space this past weekend.

The opening phase of the Sparkman Wharf is comprised of multicolored shipping containers occupied by food and drink vendors serving their trendy fare. A beer garden is set in the center and surrounded by open outdoor covered seating. A larger outdoor green space adjoins the beer garden with a small stage set nearer to the Ybor Channel. The largest space has umbrella seating and features chessboard, cornhole and shuffleboard games. Splitsville Sports Bar, a bowling alley newly renovated sets enclosed on the opposite side of the beer garden.

Personally, I wouldn’t rush to visit on the weekends for a few months. It was very crowded on our Sunday visit. Every food vendor had long lines of people waiting to order. We scouted around and decided to try Splitsville Sports Bar, but the wait was over an hour for a table because the kitchen couldn’t keep up with the orders. So, we headed back outside and waited in line for a bit for some seafood. 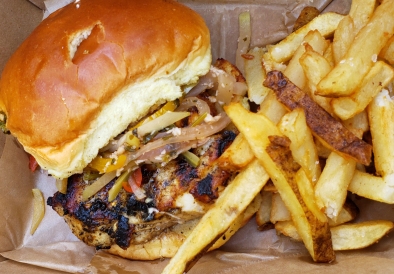 We were slightly disappointed about the long lines but weren’t in any hurry. We were lucky enough to find a table with seating just a few steps from Edison’s Swigamajig. Our fare; Grouper sandwich, Grouper Fish and Chips with one small serving of rose (approx $40.00)

Similar to Armature Works with the crowds of people walking around and standing in lines for cuisine served by food trucks, but with no air condition to keep cool.  People sitting around with their pets drinking beverages, some participating in the games. A place to sit if you can find a seat, and enjoy the sights and sounds of downtown Tampa on the River. The view of the river channel is partially obscured by fencing but you can actually see the water now. Something, that the former development failed to do, which may have contributed to their failure.